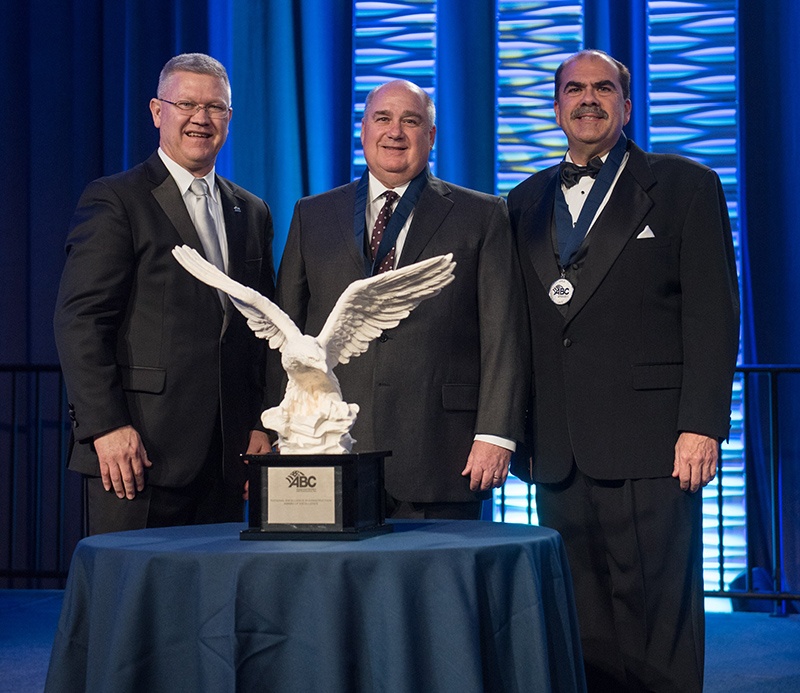 When the elders at Second Street Church of Christ decided to restore the interior and exterior of their pre-Civil War era church, they contacted the team at Brindley Construction. Our team has completed several historical restorations and we were thrilled to be involved with this renowned Pulaski, Tennessee church. The 8,810-square-foot, wood-framed church required a complete overhaul, all the way down to the stained glass windows in the sanctuary. Little did we know that our dedication and attention to detail would result in the honor of being recognized with an Associated Builders and Contractors National Eagle Award!

Originally constructed in 1851, the church served as a place of worship for Pulaski citizens until it functioned as a hospital during the Civil War. 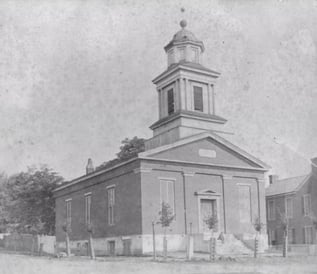 Nearby Martin Methodist College utilized the space for additional classrooms following the war. In 1894, the first members of the Church of Christ purchased the building from the Methodist Church for $1,500. The church’s first renovation came in 1901 with the Pulaski Citizen reporting, “The Church of Christ is being repaired. This well-constructed building and the needed improvements will make it one of the finest in town.”

Sadly, in 1931, the church was partially destroyed by a fire and though it was rebuilt, the decision was made not to reconstruct the original bell tower and balcony. When church membership peaked in the 1950s, various updates were made to improve both the functionality and aesthetics of the building. Additionally, between 1970 and 2000, several renovations were completed, culminating in the Family Life Center, a multipurpose meeting space available to the church and local community. When the latest restoration commenced in 2016, the Second Street Church of Christ had become an uneven conglomeration of mismatched brick and exterior adornments.

An initial challenge was the church’s limited budget. The church's building committee, consisting of Minister Jeff Jenkins, Elder Roger Reedy, Elder Mark Hayes, and Committee Member Steve Hodges, was involved in every step of the renovation process. Following our discussions, we provided them with a preliminary scope of work and a rendering. We collaborated with church elders to affordably address each area of need as our client’s budget was of the utmost importance. Based on the committee’s needs and funding constraints, our team compiled a total of eight design iterations before a final concept was selected and construction began.

At the top of the list was the extensive refurbishment of the church’s brick exterior. 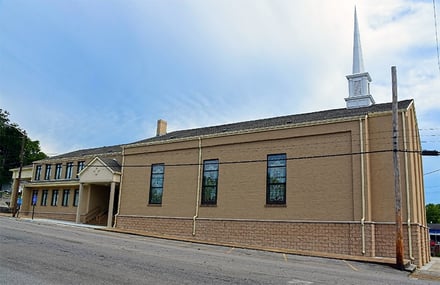 Previous renovations had resulted in three different brick finishes. In an effort to extend the church’s budget and prevent the replacement of the entire exterior, we decided to apply ReCote, an acrylic textured coating specifically formulated for direct application to masonry and concrete. This material is designed to be applied with a textured sprayer or with a brush or roller. Though it was our first experience using ReCote, we were able to apply the coating to create a uniform and more modern finish.

Additionally, we relied upon the craftsmanship of a local mason to replace the deteriorating wainscoting and window framing. Existing windows were replaced with double-pane glass. Even the stained glass in the sanctuary was restored. Artist Barbara Coffelt, of Estill Springs, Tennessee, meticulously restored the windows by hand. She redesigned the stained glass windows, reusing many of the original glass pieces. “We were all just blown away by her talent,” says Jeff Brindley, Project Manager. “She went back to her shop, took the existing glass out and reincorporated it into the refurbished windows.” Additional improvements included the complete reconstruction of the aged roof, installation of a new steeple, and replacement of the entire exterior siding and trim. An unattractive metal canopy covering the drop-off location on the building’s west side was also replaced with an aesthetic porte-cochere.

Our interior design efforts focused on two things: the sanctuary and the ground floor. 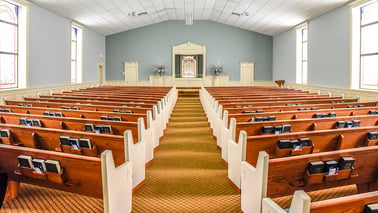 As the focal point of the church’s interior, the sanctuary was completely redesigned. The original suspended ceiling was replaced with a vaulted version, the pews were refinished, and the walls were repainted. LED lighting and new electrical control panels were installed as well. The heating and cooling systems were updated with new control units and duct work. The ground floor also required the relocation of numerous walls to repurpose office spaces, add bathrooms and a nursery, and expand the church’s lobby, all to accommodate the growing congregation. 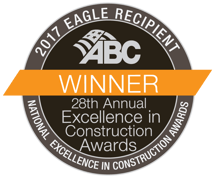 By the project’s completion, the Brindley team was able to maximize the church’s budget to completely renovate the building. In fact, our efforts have recently secured us recognition by the Associated Builders and Contractors (ABC) by receiving two prestigious awards: a regional Excellence in Construction Award in the Institutional Projects Under $5 Million Category, as well as the ABC National Eagle Award for Excellence in Construction. This recognition is due to the dedication of the Brindley project team - Project Manager Jeff Brindley, Superintendent Chris Dickey, Project Assistant Melissa Pierce, and Assistant Controller Debbie Gordon. We also want to thank Amy Primm, owner and interior designer of A Primm Design, and Michael Stewart, Principal Architect at W. Michael Stewart Architecture, for their assistance with this project.

“Associated Builders and Contractors is proud to honor Brindley Construction with a best-in-class Excellence in Construction Eagle Award for their tremendous work in completing the renovation of Second Street Church safely, on time and on budget,” said 2018 ABC National Chair George R Nash Jr., Director of Preconstruction Services at Branch & Associates in Herndon, Virginia. “The dedication to innovation, productivity and world-class craftsmanship demonstrated by Brindley and its employees produced truly impressive results that any project owner would be proud of.”

Mark Hayes, Second Street Church of Christ elder, perhaps says it best: “The end result was the transformation of an old, poorly-maintained, aesthetically-unappealing church building into a warm and welcoming worship center that reflects the spirit of the people that assemble there.”

We couldn’t have said it better ourselves.

Experience, Dedication, and Integrity are our cornerstones. Building the Southeast since 1960, our company has grown and evolved into a successful full-service construction company with extensive experience in commercial, industrial, institutional, religious, assisted-living and medical projects. We are pleased to serve clients in Tennessee, Alabama, Kentucky, Georgia, and Missouri.