Brindley Construction is delighted to announce we have been recognized by the Associated Builders & Contractors (ABC) of North Alabama at its 14th Annual Excellence in Construction Awards. The awards ceremony was held at the Jackson Center in Huntsville on November 30th, where we were presented with four awards for two projects completed this year – the Villages of Murfreesboro and the Second Street Church of Christ. 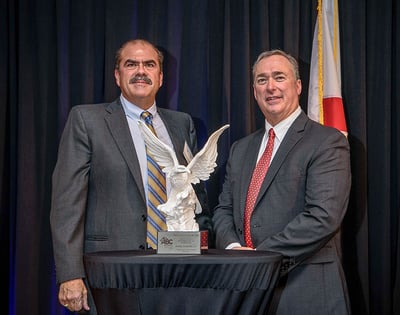 The Villages of Murfreesboro, an independent living facility located in Murfreesboro, Tennessee, was recognized with an Eagle Award for excellence in general contracting in the residential-multifamily category between $5-$10 Million. This beautiful facility has more than 70,000 square feet of residential living space and was completed on schedule despite major changes by the owner during construction. In addition to comfortable individual living units, common areas include a refreshment bar, exercise and physical therapy facility, formal dining room and an extensive commercial kitchen.

Brindley Construction was also awarded the General Contractor Project of the Year under $25 Million and an Eagle Award for the Second Street Church of Christ located in Pulaski, Tennessee. Pictured above is Vice President Jeff Brindley accepting the Eagle Award from ABC of North Alabama Chairman David Wilkerson. By closely collaborating with the church’s leadership, Brindley Construction completed design-build renovations of the 166-year-old structure on schedule and within budget. Our continued commitment to job site safety and exemplary safety programs during renovation and construction also earned us a Safety Excellence Award from ABC of North Alabama. 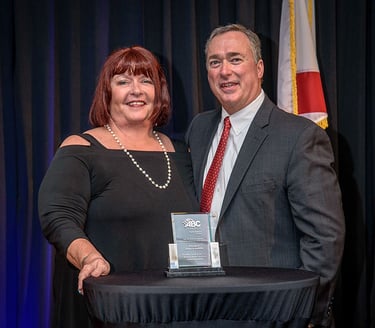 Kathy Pigg, Executive Vice President and Marketing Director at Brindley, pictured here with David Wilkerson, credits the chapter and its various programs such as STEP and Excellence in Construction for Brindley’s success. “These programs have allowed our company to improve our performance for our clients and receive invaluable national recognition. Our membership in ABC of North Alabama has paid untold benefits for our company.”

The Excellence in Construction Awards program is open to all general and subcontractor members of ABC of North Alabama. The projects are judged on overall project distinctiveness, execution of design, craftsmanship, coordination, budgeting, safety, difficulty and unusual challenges. Congratulations, Team Brindley!

Executive Vice President and Director of Marketing
Kathy began her career as a project assistant with Brindley Construction, LLC. She moved up through the ranks becoming a project manager and took charge of all multi-family construction. As Executive Vice President she manages the warranty program for our clients and is vital in the every day management of each project. With years of practical experience and her continuing quest for knowledge, she strives to serve the clients of Brindley Construction in a professional and sincere manner. Kathy is a Giles County native and has lived and worked here her entire life.