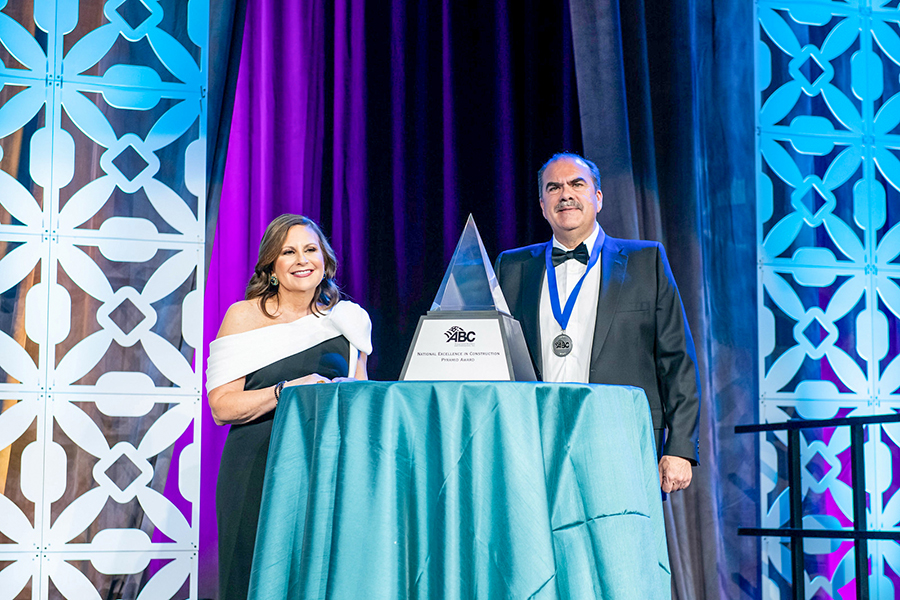 Stephanie Schmidt, ABC National Chair of the Board of Directors, presents Jeff Brindley with the Pyramid Award for National Excellence in Construction for the Legends Restaurant project.

At the awards ceremony, ABC honored the year’s most outstanding construction projects and contractors for remarkable achievements in quality, leadership, safety, innovation and inclusion, diversity, and equity. Each project was judged by leaders in the construction industry, with every award winner being recognized for the skill and creativity of the entire team responsible for an outstanding merit shop construction project. The award recipients also exceeded expectations in innovation and quality while continuing to adapt to unprecedented health and safety protocols.

The Brindley team could not have completed these projects without the amazing teams and owners, including architects Emmett Smith for Wolf Gap and George Nuber for Legends Steakhouse.

The Brindley Construction team is thrilled to have both of these great projects acknowledged on the local and national stage!

Ronnie earned a Bachelor of Science/Business Administration degree from Auburn University and has more than 30 years of professional experience in general construction. Before assuming responsibility for the overall management and operations at Brindley Construction, he served in various areas on the business side of the corporation. Ronnie’s primary commitment is to direct the company’s management and professional staff in providing complete and comprehensive services to ensure every client’s design needs are met, within their budget and their timeframe. His continued goal is to establish Brindley Construction as a responsible, growing firm, respected in the community and AEC field. He is active in the community and is a member of the Industrial Development Board, and was a former president of the Pulaski Exchange Club and the Giles County Chamber of Commerce.