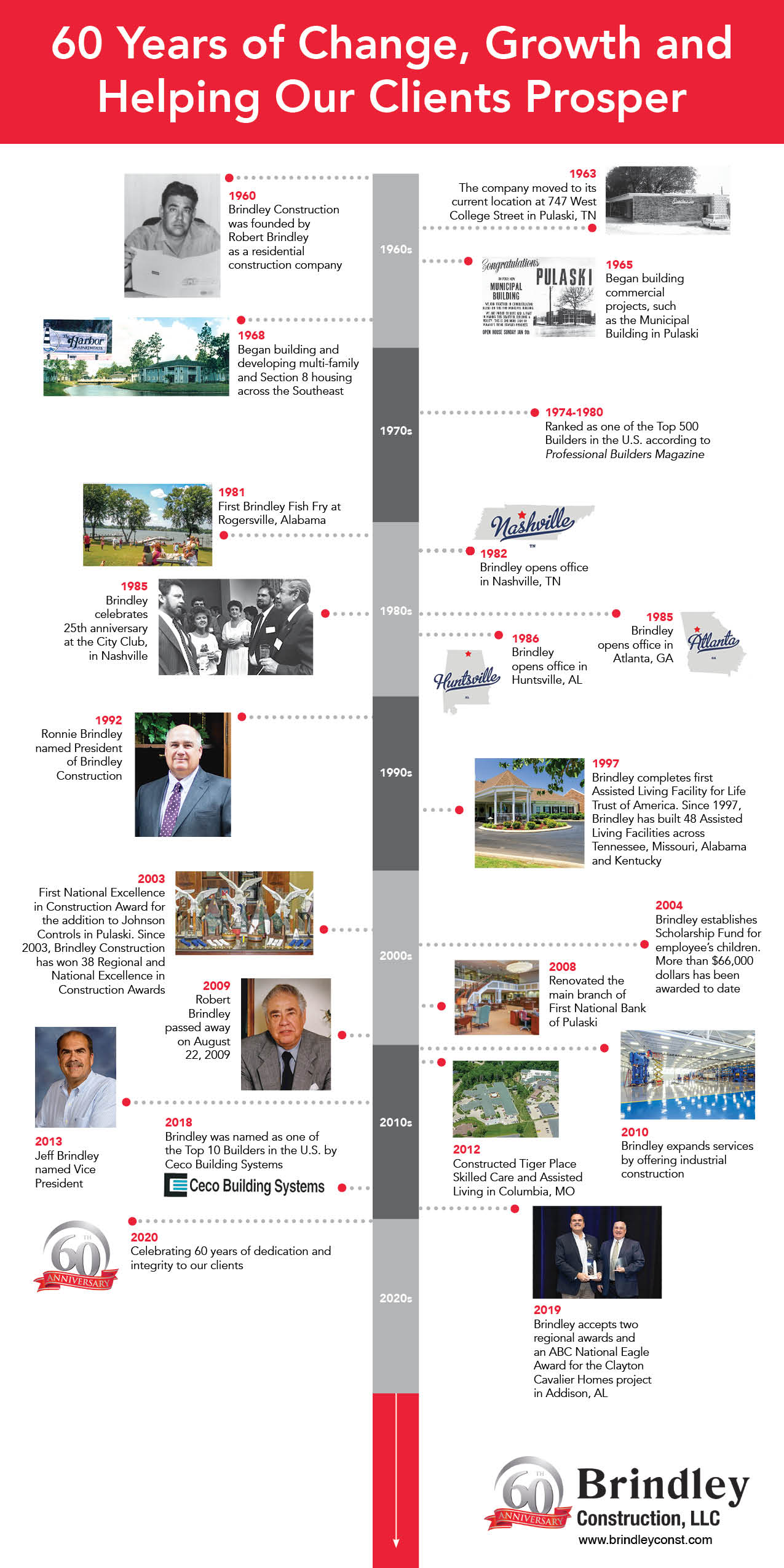 Municipal Building: Since 1965, we have been fortunate to build many municipal projects—including the Giles County Public Library. Renovations included a new gabled roof, new heating and cooling system, new windows and doors, and improved lighting and technology.

Multifamily & Section 8 Housing – Another multi-family building we built can be found right here in Pulaski. In 1979, The Pulaski Terrace Phase II Apartments, located on West College Street, were completed. Built as an extension to the existing Pulaski Terrace Apartments, they consisted of 30 one-, two- and three-bedroom units. Two apartments were constructed especially for handicapped tenants.

First Assisted Living Project: We built our first 28-bed assisted living unit in Sheffield, Alabama. The complex provided clients with their own apartment-type housing, and featured options such as food preparation and medication reminders for those able to manage on their own with some assistance. Along with this project, we completed facilities in Cullman and Madison for Life Trust of America.

Johnson Controls: This project included an 80 x 600-foot addition to increase the manufacturing floor at the plant, as well as a 16,000-square-foot office and cafeteria addition. Features included installation of a new roof drain system, new concrete sidewalks and a parking lot. All this had to be completed without any loss of production time at the fully functioning plant and within an extremely tight construction schedule of just 155 days.

First National Bank of Pulaski Remodel: First National Bank contacted Brindley Construction about a renovation to help improve customer service. The project needed to happen while the bank remained fully operational to allow customers to continue to do their banking uninterrupted. The focus of this 50,000-square-foot project was to preserve significant historical elements of the bank while adapting the space to today’s needs. The project included renovation of three floors of office space, a fully functional theatre and stage area, and replacement of an older single-pane window wall with a modern insulated, Low-E coated curtain wall system.

North American Stamping Group – Tennessee South: The 25,000-square-foot addition to the facility in Pulaski started with site grading and the design of a system to divert water away from the existing buildings. One of the challenges of this project was to remove the end wall columns of the existing building and to redesign the steel to allow for the columns to be removed.

The Neighborhoods at Tiger Place: This 68,477-square-foot, two-story assisted living facility located in Columbia, Missouri, consisted of a large common area with vaulted ceilings and windows overlooking courtyards, a physical rehab area, and a memory care wing with 14 patient rooms. The facility houses five separate “neighborhoods,” each including an Internet café, media rooms, and outdoor living areas. A central kitchen within each neighborhood was equipped with its own restaurant and bakery. Amenities also included a full-size indoor therapy pool, two elevators, and a childcare center for the children of the facility’s employees.

Lauren earned a Bachelors of Business Administration degree from Martin Methodist College where she started out as a Purchasing Intern for a local headlight manufacturer in Pulaski, Tennessee. After being promoted to commodity buyer and working in the automotive industry for 4 years, she decided to explore a career in construction where she was a Procurement Agent for a home builder in Nashville, Tennessee. She fell in love with construction and joined the Brindley Construction team in 2020 as the Marketing Director. With her background in construction and love for people, she strives to have Brindley Construction be on the top of the list for any construction job that is needed.